so, since John and I have moved to the suburbs, it seems that each time we take a drive together and pass through a township/county/neighborhood line, he has a story to tell me about some girl who he once kissed/dated/held hands with that lived in that particular area. I like to tease him about how he's kissed at least 50-100 girls. this is especially funny because he happens to hate a long-time-ago booty call friend of mine and likes to say that he was skanky because he dated like 50 different girls in his quest for his true soul mate (said person is now happily married & with child, I think - and I'm not sure he actually went on dates with 50 different people, but whatever).

ANYWAYS: John decided today that he would come with me to my OB exam. I have them every week now that I'm so close to my due date (11 days!). everything was going as usual, weight check (yes, I'm a whale), urine exam, blood pressure, baby heart beat - all done by the technician immediately and expertly. then the usual lengthy wait for the dr. to enter the room...it was nice to have John around to talk to, since it took longer than usual for the MD to show up. finally, the knock came, and in walked the doctor. she saw John before she saw me (there are a lot of MDs in the practice, so I hadn't met her yet) and she said IMMEDIATELY - and I do mean AS SOON AS SHE SET EYES UPON JOHN, "Oh, we went to high school together." then she looked at me and said, "I know your husband, we were in chorus together." then she looked at John and said, "We know each other." John looked totally taken aback, but I thought it was funny. I mean, there I was, on the examination table, a beached whale with no underwear on, waiting to get her fingers placed onto my cervix and she went to high school with my husband. we made some small talk, then got professional about the exam. once we finished up, she left the room, and I put my clothes back on. John was like, "Um, that was awkward." turns out he flirted mercilessly with her, even though he was dating someone else at the time, and that that someone else stared the future doctor down and said she'd maybe kill her.

I started cracking up because all I could think was that John has seriously dated/had run-ins with/kissed like a million girls around these suburbs. then I had to stop because the walls of the practice are about as thick as cardboard and I didn't want the MD who happened to be the one scheduled to provide me with a c-section, should I need it, to hear us laughing about her.

Ok, I can't believe that NO one wants to hear the story of me getting dumped the other day by a long, lost ex. but now I have a RUMOR...to share... 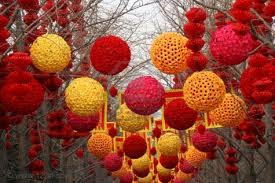 I didn't take a picture, but we did eat dumplings, radish cake, and new year cake on Chinese New Year's Eve. Last night, we had noodles for dinner. we didn't give Henry a red envelope containing crisp bills, but then again, he didn't stay up late to ensure us a long life, so I'm calling it even. even with the food, it didn't feel very festive since there was only our nuclear family present, and I was too tired to decorate...maybe next year. baby steps.
Posted by e at 5:25 AM No comments: