life after the city - IT DOES EXIST!

I was one of those annoying teenagers who thought of themselves as edgy, smart, and philosophical. to give you an idea of my psyche back then, my reading list graduated from middle school stuff like, The Outisders and Ordinary People, to Nausea and On the Road in high school. by the time I was a high school sophomore, I'd also abandoned my deep, middle school love of The Police to listen to the likes of The Velvet Underground, Big Black, and Sonic Youth.

needless to say, back in those days I dreamt of fleeing the suburbs to live on my own, in a big city - of course! in the end, I did manage to get away from the suburbs, but I only managed to stay away for 22 years (and if I'm being honest, 9 of those years were spent in Philadelphia, which only partially qualifies as "away").

and now, in the words of George Castanza, "I'm back, baby!" not only did I move back to Philadelphia in the summer of 2005, but I moved back to Fort Washington last spring (March 2010). I thought that I would have some sort of crazy identity crisis once I finally landed in the suburbs again, but lo - nothing of the sort has happened, and actually, I've found that I'm much happier in Fort Washington than I was in Fishtown. 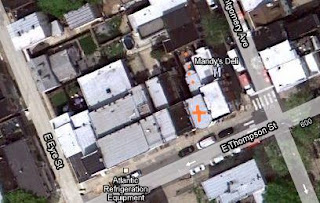 orange + sign and dots depict our lovely (that's not sarcasm!) home in Fishtown, Philadelphia
vs. 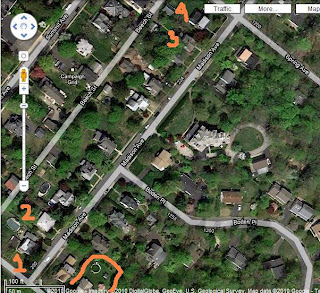 what I do miss from time to time are my friends. I don't see them much now, and as you might suspect, it isn't easy to make new friends in the 'burbs. John actually got sad once when our next door neighbors had a big party and didn't invite us. Lori, who is the cute woman next door, explained the omission away the next time we ran into each other. she told me that Mark, her husband and coincidentally John's primary care physician, didn't feel comfortable with a patient at his keg party. hey, that makes sense to me!

anyway, we've finally been able to breach the inner circle of Madison Ave., and let me tell you that it's kind of awesome. we went over to Lori and Mark's house for drinks and hanging out last Friday evening, and I was seriously excited by the fact that Lori is really great, and that there are other neighbors who are similarly genuinely fun to be around. not that I'm claiming to be the world's authority on hipness or anything, I'm just saying that I sort of believed the hype around there not being even one interesting person in the suburbs (me included).

of course, it could just be that a) I'm old, b) I'm now a parent, and c) I'm extremely boring these days (hey, I have an office job and haven't attended a show of any sort in ages - I'm not delusional), but still, I suppose that ignorance is bliss. anyway, the other cool thing about having been able to penetrate the Madison Ave. clique is that their kids are all friends with each other too, and it's the first time I've ever seen the whole kids-in-and-out-of-each-others'-houses dynamic. it's so cool! the extra bonus is that these are all kids who love toddlers. Henry was feted, provided with laps, hugs, and dotes...I think I've moved to Stars Hollow.
Posted by e at 6:16 AM 2 comments:

I promised Zab a photo of our garden ages ago, but being me, I never took any...this weekend, I made a little bouquet. yesterday I actually took a terrible photo of it. it's blurry and dark, but look, you can see my favorite echinacea varietal - coconut lime! the one in the foreground still has its petals, the "green" balls surrounding have lost their petals, then there's one dark, dried ball in the background. there's also a little rose and some salvia in the bundle. sadly, my garden ran riot this year due to my pregnancy laziness, but since nothing beats the joy of home grown flowers, I plan to do a lot of seeding and planting this coming spring. 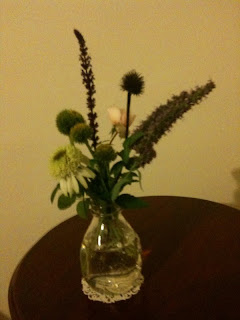 and there's Henry, making the most of a trip to Anthropologie. he's really better than I could ever have imagined him being. I'm sure ALL parents say that! kudos to dad for taking this pic. 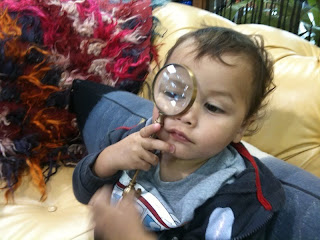 that is pretty much my life these days...work, home, sleep. I'm looking for chandeliers that don't cost an arm and a leg for our main sitting room. we took the trip to Anthropologie for lighting inspiration, but there was nothing that really sparked our interest. of course, there were plenty of non-chandelier objects (um, the midas tree lamp, the grey plaid wool lampshade, and the awesome leather chair - I think I have to find a stump to hollow out, wire, and spray paint gold!)...oh right, I was writing a blog entry - I just went into shopping online at Anthropologie mode. I swear that their styling - no matter how inappropriate for my lifestyle and income - never fails to get me. as a matter of fact, I intend to get back to my pre-pre- pregnancy weight just so I can shop with abandon at their sales. so there. sorry for the sidetrack into anthrofantasyland. I have to get back to my wishlist now.
Posted by e at 1:31 PM No comments: