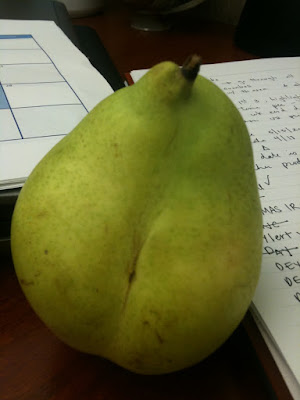 suggestive breakfast today is at that perfect state of ripeness. yum.

ktiker's post is a tear-jerker, but I wanted to mention that it heartened me greatly to read that she's "never had an easy mile." when I'm struggling with running, it always seems like everyone else is just breezing through their workouts. it helps to hear that it isn't easy for everyone else, after all. thanks kerm!

oh and another comment, imspired by kerm's post: since coming back to work after having baby number 2, I've been thinking hard about life priorities. family and friends and community people, these are what I've identified as being important to me. after all, what happiness can we have without a mirror to reflect our greatest moments back at us? what would we do without our dearest to bring our sadnesses to? I've done my share of bringing superficial stress home to bear on my personal life, and I for one, am going to pledge to (1) try and remember what's really important when 'things feel rough,' and (2) be present in my life, and not to keep thinking, if I just get through the next...hours/days/week/month. sometimes blurring out stressful times seems like the way to keep on keeping on, but then you also end up forgetting the good things that happen in small moments. thank goodness for cats and kids!
Posted by e at 5:56 AM 1 comment: 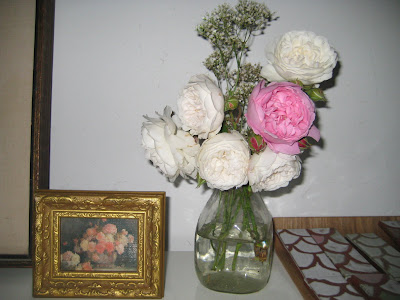 flowers from the garden - my garden! david austin old english roses are the way to go - especially if you love peonies.

but what I really wanted to say is, check out this website. this ben person is truly inspirational, but to get the full impact, scroll down to his video, on the bottom of the right sidebar. I was poking around fitness sites, wondering if I would be able to finish tomorrow morning's run, when I found real motivation.

time to go to sleep! good night friends.
Posted by e at 6:42 PM No comments: 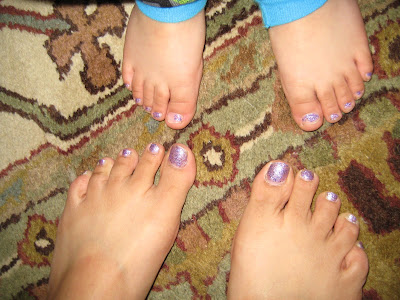 I'm not one to court controversy, but then, I'm not writing a national magazine editorial here, so publishing a photo of my and my son's matching bieber-cures likely won't raise even one eyebrow. pretty sweet, huh? by the way, grammaticaly, I did not know how to construct that sentence (the one previous to "pretty sweet, huh?").

currently working on week 4 of the c25k plan. I'm not going to lie for the sake of my fragile ego. yesterday was tough. I made it through the beginning 5 min walk just fine, thank you very much! the last three minutes of the first 10 min run were rough (incline = 1, mph = 5.7), and I wanted very much to stop. but, I finished it and all the while I thought, "oh man, these are just the first 10 minutes! how am I supposed to run 20 minutes nonstop in a week and a half?" for the rest of the workout, I kept the treadmill incline at 1 and adjusted my jogging speed to 6 mph. all went well...except those last five minutes jogging. ugh, again, I wanted to stop after 3 minutes (or maybe after 30 seconds), but I made myself finish. nothing feels better than finishing a run that you wanted to abort. even still, though, I'm not sure I'm looking forward to tomorrow's run. I get anxious thinking that I might not be able to do it. is that silly? I'm used to getting all harsh on myself for being so out of shape, but I'm going to try something I saw on 13lbs' blog. she had the graciousness to THANK her body for its performance. perhaps I will do the same and my body will respond with newfound generosity. is this the same as speaking of myself in the third person? it certainly feels the same.
Posted by e at 8:59 AM No comments:

I'm downloading a trial version of adobe illustrator, which is crawling at an anxiety-inducing pace, so I've decided to post from my phone. will not using my computer for anything else speed the download? no, probably not, but every once in a while, I allow myself to engage in some magical thinking.

I'm happy to report that I've faithfully completed two full weeks of c25k, and that I started week three today. even though I modified the program by adding in a 10min starting jog period, I want to tell any non-runner reading this now: if you want to start running, but don't know what to do, follow the c25k schedule. it's gentle and empowering.

and now for some saved photo randomness:

japanese candy bar/lifestyle enhancer - on the market for actual consumption! I like to think that music plays as you open the wrapper and eat - while dancing, of course. 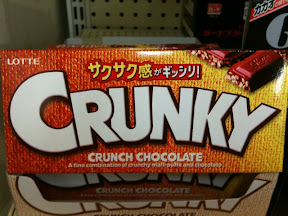 these tights are sized for a five-year-old. I say that they're being wasted on those who cannot appreciate true fashion. I want a pair, though I have no idea where I'd wear them. maybe just for the secret satisfaction of the declaration itself. 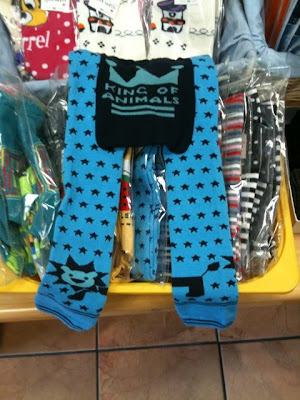 even though it looks like it here, I did NOT instruct the hairstylist (Shira) to give me "The Beiber." I admit that this photo makes it seem as if I did, but it's lying! however, max is definitely winking. and yes, he is monstrously large, which is nice because he makes me look smaller than I actually am. 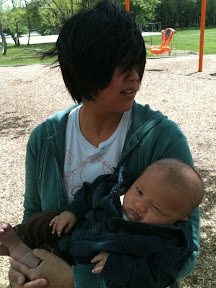 so, did YOU know that this is an actual product??? who buys this? who uses this? 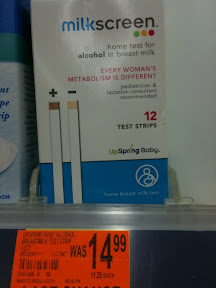 back to the Beib - my neice turned me on to the purple glitter one less lonely girl opi color. henry and I are both currently sporting the shade on our toes. the absolute glittery-ness of it is captivating. so much so that I decided I needed to buy a bottle. um - sold OUT at target! 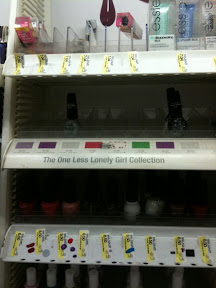 the hair that got chopped away is all ready to be sent to locks of love. 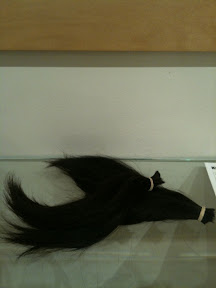 btw, the phone post had some serious bugs, so I had to abort the download and fix the errors via better blogger user interface. even still, there seems to be some spacing issues. sigh. I'm off to purchase the plants for our new front-yard horticulture project!!!! 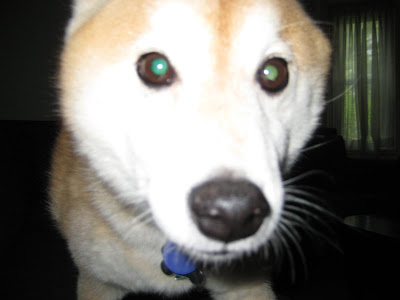 I was on the phone with eye-fi customer service for an hour yesterday and maybe resolved the issue? it's hard to tell because the upload goes so slowly. that's the one photo that the card managed to upload while I was on the phone yesterday. but it took all day for only four other photos to upload. what's with that? I still can't figure it out, plus the utility doesn't work with the macbook. ugh. a little bit of working is certainly better than no working, but not as good as just plain working. before I go back to work, I'll be on the phone with them again. today is too soon for my psyche.

went to the gym again today - two times in one week! that's a big deal for me right now. the treadmill workout wasn't so bad today because it was rainy outside. it was also more tolerable because I decided to copycat thirteen pounds (right sidebar) and take the C25K (couch to 5K) approach to running, and the treadmill is great tool for doing those tiny repeats. I did decide to modify the C25K program by adding in a 10min run just after the 5 minute walking warmup. so, for my workout today: I walked five minutes to warm up, ran 10 minutes, then did the C25K week one workout. after 35 minutes, I'd travelled about 2.6 miles and nowhere all at once. well, I did see millionaire matchmaker for the first time in my life...

technical info (tmi?): the treadmill incline was set at 1 the whole time. all walks were done at the leisurely pace of 3mph. the initial 10 minutes were run at 5.5mph. all subsequent 1 min runs were performed at 6mph.

it felt good, I just hope I can keep it up. my body needs some help. serious help. I've been a postpartum mess. I still have to add core workouts in somewhere. oh, and strength workouts on the days I don't run. I've always preferred to be an everyday runner, versus an every other day runner, but I'm not going to push my body too hard right now. but that means that there's no excuse to not do a strength workout at least twice a week.

when I left the gym and got back into the car, destination unknown was playing on satellite station new wave1 (we got free service with our car - will it run out? we have no idea). remember missing persons? 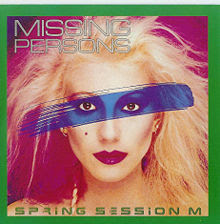 I also found this photo of dale bozzio - the same lady as in the previous photo (lead singer). apparently, she's an animal hoarder, and she got brought up on charges. reported by tmz - of course. 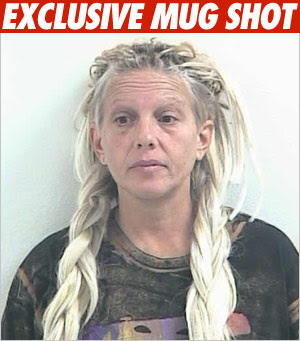 so, no photos due to eye fi card failure. eye fi is the name of my camera's sd card manufacturer. the card automatically uploads my photos to picasa when it's working properly. it's seriously one of the best technical innovations I've ever experienced, but now it's not working! wtf? so, I'm about to embark on a trip through customer service land. fortification needed, but I can't drink alcohol this early in the morning. coffee will have to do.

I went to the gym yesterday. ran a mile on the treadmill. walked a little. yes, it was a beautiful spring day here, so why didn't I run outside? because it wasn't early morning, and I was embarrassed to do my pitiful jog past all the kids walking home from school. sad, isn't it? well, anyhoo, this is my month to begin my fitness come back. kid #2 popped out, no more pregnancies in my future, and no excuses not to be in shape.

so, wow, running on the treadmill just feels so blah when it's beautiful outside! cheers, off to chat with someone who will inevitably think me a retard.
Posted by e at 6:54 AM No comments: