so, you may not know this, but I'm really a shabby chic girl at heart. ok, so that's not entirely true, in the sense that I certainly don't stick to that aesthetic when it comes to decor, but it is true in that those shabby elements get me every time. John is NOT shabby or chic. he's victorian, but in a weird, male, left-brain kind of way. 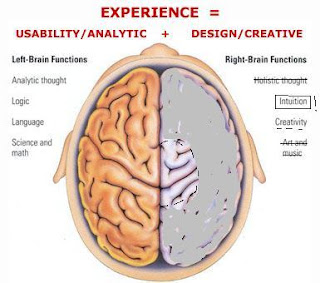 this is an image that depicts the relationship between john's right and left brains. I think he uses nearly all of his right brain for intuition because he is fairly intuitive. he's a little creative, but mostly he's into the color blue, and symmetry. these two preoccupations express themselves in decorating thusly: "how about we paint the walls a shade of blue, and hang the pictures in a symmetrical layout?" he uses most of his left brain thinking about language, but not using it properly.

but I digress. what I wanted to do was to say that I saw this photo posted on apartment therapy, and I'm really into it. apartment therapy got the photo from a website called, Cafe Cartolina. I haven't looked through the entire site, but from the glance I took at the current first page, I'll probably go back there regularly. 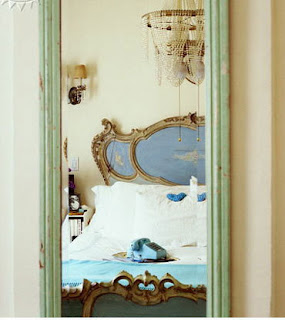 I totally want that bedframe. john would not want that bedframe. and there you have our entire home decorating process. it's basically an iterative conversation that follows the same, general outline each time. he suggests something, I say I don't like it. I suggest something, he says he doesn't like it. the one thing that does change is the emphasis on the dislike. some things merit a lazy, "I don't think so...," whereas others rightfully deserve an adamant (and loud), "NO!"

we both get sick of the conversation, so john has started to do things like put light fixtures in without saying anything. they just show up. they're invariably ugly, and there they are - in my wall. ugh.
Posted by e at 8:37 AM 1 comment:

I will post again soon, but in the meantime, here's some good news:

Eastern District is open for business. They stock craft beer and cheeses and other stuff too. Go take a look at the website. mmmmmmmmm. For those of us not in GP, they do ship.
Posted by e at 5:57 AM No comments:

oh, and check out this article. it's about cheese. if that isn't enough of a sell, then maybe its title will convince you that it's scan-worthy (and seriously, it's not chockablock full of info, or anything, so it'll only take you a few seconds to read) — Why Cheese Is Like "Dairy Crack": Because It's Got Morphine In It.

which brings me to the topics of fondue and raclette. I recently read two cheese-centric entries in David Leibovitz's blog and he's totally convinced me that I just have to make and eat some fondue and raclette. I've always loved the idea of cheese fondue, and I even enjoy the actual fondue itself, but I've never really considered making it at home. now that I've read David Lebovitz's love-letter to fondue, I'm thinking about buying a fondue set from Ikea. I'm also thinking about buying a giant wedge of some kind of yummy cheese to throw onto a nice fire. I'm totally intrigued by the idea simultaneously heating myself, cooking potatoes wrapped in aluminum foil, and heating a big wedge of some kind of delicious cheese in my fireplace, at home. doesn't that sound so comfy?

hopefully, no great tragedy will befall my household since I'll effectively be dosing myself with an opiate whilst in front of an open fire.
Posted by e at 10:21 AM 2 comments:

some may find martha stewart to be stomach-churningly off-putting, but I'm totally seduced. I love perfection-seeking, borderline personalities. so much so, that I've read every variation of sylvia plath's journals that I could find (including her published letters). rather than seeing these women as intimidating, I find them comforting. for example, in the most chaotic times of my life, when I'm feeling overwhelmed by whatever situation/s I've gotten myself into, I pick up a sylvia plath journal and get centered. I think it's simply that reading about how she got all lathered up in insanity via her quest to be perfect reassures me that my astounding lack of perfection must be leading me to a more tempered personality/life/ability to socialize. anyway, this is all to say that I had to beg myself NOT to buy the most recent version of martha stewart's living magazine yesterday. though, since I find myself thinking about her today, I have a feeling that this holiday season will not feel complete without an attempt at at least one martha stewart craft exploration.

anyway, I went looking for the cover of the issue I wanted to buy, so that I could paste it into this entry, but what I found was this:

martha and her french bulldogs
so cute, right? but what happened to these??? 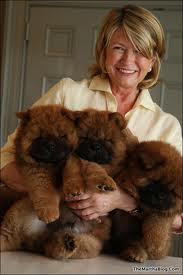 does she still have paw paw and her other chows?
I was a bit alarmed, so I did about 5 seconds worth of research and found that she does still have at least paw paw, who was described as "old" and "sage." look at how cute those chows are! I want one!