Hi!!! to anyone who is still checking on this blog, "you RULE!"

what have I been doing? besides working, I'm not altogether sure. it's been a fugue-state lately, peeps!

hm, I've been running in the mornings, well, except for recently, when I haven't been able to manage waking up in the morning (before 6am, that is). I think I could manage it if I could make 8pm my bedtime. who would I turn into if I began going to bed at 8pm? I shudder to think - I mean, there's little enough going on in my life already. my father used to go to bed that early sometimes and I thought he was out of his mind. now I see where he was coming from. ahhh, sleepy good times.

I had a miniscule salad for lunch today, and while it was yummy, it didn't fill me up. so what happened after lunch? I ate a somewhat stale cupcake (it was good!). I know, I know, not eating the icing is a waste, but I don't really like icing. it's too sweet for me. 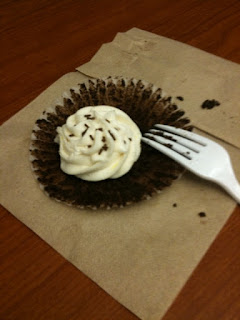 and followed that up with a delicious miso broth (cold). 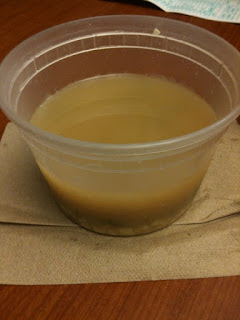 I've entered a new cooking arena. I've undertaken my very first pho trial. Pho is a Vietnamese broth. You can make the broth with various animal flavors, and since I'm using beef, I'm making a pho bo. I got the recipe from Steamy Kitchen. I haven't yet started reading the rest of her blog (I found the recipe by doing a Google search), but the pho entry is kind of hilarious. the author dispelled any misconceptions around the pronunciation of the word, pho (pronounced fah), then began using the phrase, "pho-shizzle." I now think not of pho, but of pho-shizzle.