have I mentioned that I tried the infamous nearly zero carbs diet for a few weeks? it (surprisingly) wasn't a disaster, and actually helped me to lose about ten pounds without cutting calories and without wanting to kill anyone. I was pretty liberal with the fats - as in, sure, I'll eat that slim jim (yes, I did). 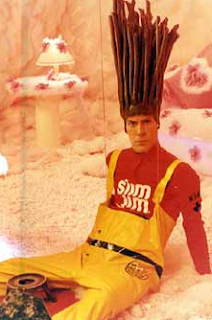 the oddest side affect of the diet was that I couldn't stop myself from having KFC extra crispy. my friend, Heather, set me off by reminding me that KFC existed, and once that happened, it was all over. a couple of months later, I was at the drive through buying 8 pieces...I didn't wolf them all down at once, or anything as sordid as that, but I certainly ate a few of the pieces throughout the week.  they were SO GOOD, obviously not zero carb due to breading, but if you're judicious about it, you can still eat low carb and lose weight while incorporating fried chicken into your diet (hm, maybe I can publish the fried chicken diet).

I'm over it now, thank goodness (ask me about McDonald's and pregnancy #2 sometime)...

I'm also over the low carb diet. it stopped working after that initial ten pounds. I suspect that the lack of sustained efficacy had something to do with the fact that it was impossible for me to cut the fatty things out and still feel OK with eating so few carbs. to actually begin moderating my caloric intake, I added carbs back in so that I'd feel happier - rice is AWESOME (stay tuned for the bi bim bop diet). I'm not sure that running and low carb go together. vegetarian and low carb is really hard. vegan and low carb is nearly impossible. not that I'm either or those, but I am trying to be more conscious of how much meat I consume.

even still, it's really annoying that body chemistry has to be so complicated. why do I have to trick my body into using fat as energy? if my body has so little intention of using fat for fuel, then why is it so good at turning food into fat and packing it away? I'm not a hoarder and it bothers me that my body is. I swear that my body is utterly determined to keep as many calories as it can. take my pregnancies as evidence: I've had two children and have not gone into labor once. why is that? well, obviously because my body was intent upon resorbing those nutrients and energy! I rest my case.