the first time I made a greenie, it was on a whim - I was inspired by Kate, and I had to go with what I had in the house. therefore, I used frozen spinach. I cooked it in the microwave, in a covered bowl. it was very convenient. I want to continue to use this method, but am wondering, "are all the nutritive benefits of the spinach negated if I begin with frozen stuff?" I've read that freezing does preserve nutrients, but still, I feel guilty beginning with a frozen product just because it happens to be more convenient. at least it's organic. 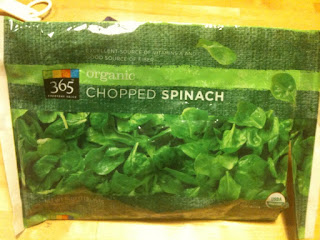 I put frozen pineapple into today's version of the greenie. I used 3/4 of a cup, and since it was frozen, I skipped the ice cubes. I learned this trick long ago from my friend, Spencer, who used to make really great fruit smoothies. he always had bananas (peeled and cut in quarters) and assorted fruits in his freezer. that way, any time the urge hit him, he could whip up a great frozen drink. I always thought that his smoothies were particularly good because they weren't diluted with ice. 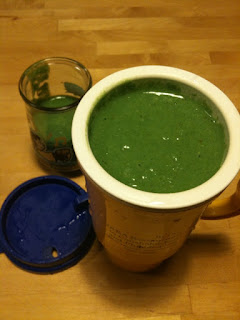 if you look closely, at the photo below, you'll see that I also used ground flax seeds today. OK, so maybe I should have bought the whole seeds, but I was afraid that they wouldn't get pulverized by my blender (though it is an awesome one). I didn't want to be stuck with a 'seedy' greenie. I am a wimp when it comes to healthy eating. 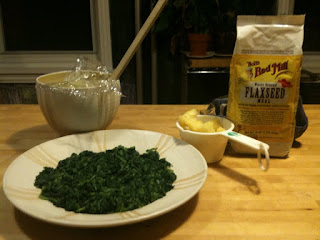 in this photo you can see my spinach method. I measure out two cups frozen, place into tall bowl, cover bowl with wrap, microwave 3 minutes, spread cooked spinach in thin layer on plate to encourage cooling. stuff all ingredients into blender (in green monster order) and blend until smooth. verdict = best one yet - pineapple makes it awesome!

besides my usual line-up of snacks, I brought one cup of cooked barley and one half of a bag of Tasty Bite's Agra Peas and Greens in for lunch. I love some of Tasty Bite's Indian foods. they're super convient, and DO NOT taste ANYTHING like that Pacific Tuscan White Bean Soup (which I wastefully threw away). 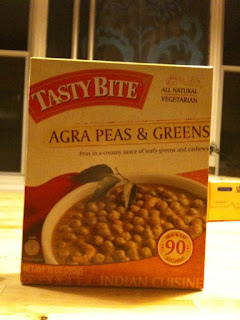 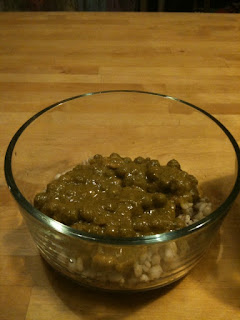 it doesn't look that attractive, but it's good.

breakfast today was awesome. with my greenie, I had a slice of toasted multigrain bread and half an avocado sprinkled with salt and lime juice. 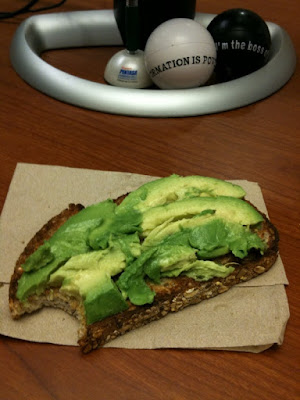