I'm painfully used to getting up early, and every once in a while, I get up around 5:30am on a Saturday. since I was up, I decided to do some cooking. 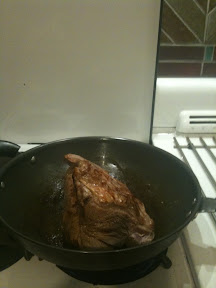 first, I browned this giant roast. it was on sale - half price - the only one in the pile with a reduced price. should I be afraid of why? once it started smelling good, I put those nagging thoughts away.

as the meat browned, I chopped two large onions, 4 stalks of celery, one large (peeled) potato, and two carrots. I augmented the carrot volume by using those little, milled carrots that the veggie manufacturers try to pass off as babies.

once the vegetables were chopped, I realized that there was no way everything would fit into my crock pot, so I had to bust out my badass, off-name brand, enalmeled cast-iron pot. I heated the pot and 1Tbsp. olive oil and sweated everything in traditional order (onions first, and so on). in the end I threw in a handful of grape tomatoes (because I had them).

I didn't want to waste the pan juices that were left in the pan I used to brown the roast, so I used that pan to cook some of the onions (I reserved a cup of raw onions for this purpose). once these onions were cooked, I added one cup of red wine and scraped up all of the yummy meat stuff off the bottom of the pan. finally, I united the contents of both pans and nestled the meat on top. 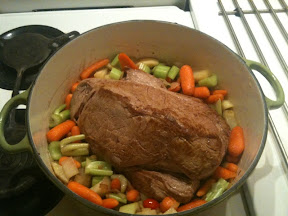 I hope it ends up tasting as delicious as it looks. 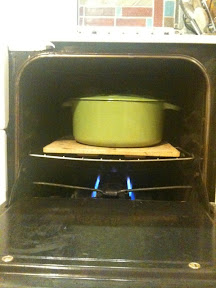 I put the covered cast-iron pot into my oven at 375F. I'm going out at 10am, but it should get pretty far in three hours. I'm going to keep everything in the closed oven while I'm gone, but with the heat off - my hypothesis is: if I leave the oven door closed, it will retain its heat for some time and continue to cook the roast. I don't expect it to be cooked thoroughly, but I'll see where it is when I get back and continue the cooking in the fired up oven for however long it needs. is that a hare-brained scheme, or sound planning? 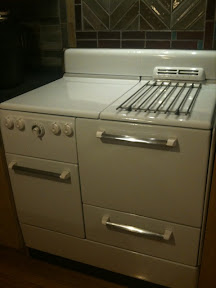 this is my stove/oven. it came with my house - isn't awesome? the roast is in there!
o&o, e